One of my first thoughts when thinking of my personal “musts” while living in Europe was going to a Liverpool FC match. I’ve been a fan since I was a kid, following in my brother, Shane’s, footsteps. We used to sit together in the living room and watch Premier League games on Fox Soccer Channel while tossing a mini skills ball back and forth. I look back on those memories so fondly, making this event extra special for me.

We arrived in Liverpool the evening of New Years day. Most businesses were closed and the streets were quiet. Our first order of business was to retrieve our tickets for the match. The system used for season ticket holders is not favorable for reselling for single games. As a member, you receive a card which is scanned and used for all games. So when I bought our tickets online, I was not able to select specific seats, I simply chose two tickets together of the cheapest price and we got what we got. I was later notified that to get our “tickets” we would have to meet the seller in person before the match.

So the night before, we made our way to a hotel downtown where we met two men in the lobby who gave us two season member cards. Due to the fact that these cards have tickets to every match of the season on them, they are obviously extremely valuable. We had to leave some form of identification with them to be returned right after the match when we gave back the membership cards. I’d be lying if I said I wasn’t slightly nervous about this whole process and what could go wrong, but it was all fine in the end.

The day of the match was essentially our only day in Liverpool. We decided to go on a Beatles tour in the afternoon. We headed down to the waterfront to check out “The Fab 4 Cafe and Museum” first. We had some coffee and looked around until it was time for the tour.

The tour was given on a red double decker bus with a guide telling us all about the history of Liverpool and famous places related to the Beatles. Of course some of the highlights included Penny Lane and Strawberry Fields. We got to stop and take pictures and listen to Beatles songs along the way. It felt very nostalgic and surreal for me to be there because I remember listening to the Beatles with my dad growing up. He would tell me all about the band and the meaning behind the songs. I knew he would love that tour so I tried to enjoy it extra for him.

After the tour, we made our way out to Anfield for the match. We got on a packed bus that runs a direct route on match days. It was raining a bit when we arrived, but no matter because Jacob’s favorite thing about European stadiums (the roof over the seats) came in handy. We arrived very early so we could have plenty of time to roam around. We each grabbed a beer and were surprised when we saw signs saying that bringing beer to your seat is prohibited. So we drank them in the concourse and went to our seats.

As most people know, football clubs in Europe have a very rich history. I’ve spent years witnessing that on my television from far away, never thinking I would get to really experience it. One of Liverpool’s most known traditions is singing “You’ll Never Walk Alone,” before a match begins or during important moments. Getting to do that with over 50,000 others is now one of my most cherished sports memories.

Liverpool went on to win the match 2-0, the perfect ending to an unforgettable week of travelling.

I know that Jacob didn’t enjoy this part of the trip anywhere near as much as I did, but huge shoutout to him for being such a good sport and letting me have this one. 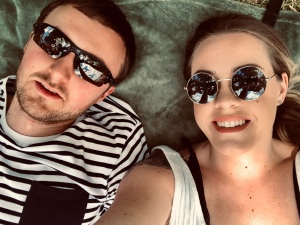